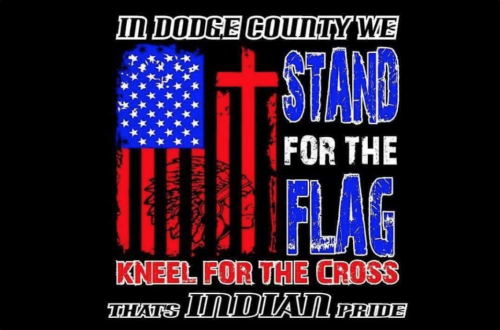 (Kaylee McGhee, Liberty Headlines) T-shirts sold by Georgia high school cheerleaders as part of a fundraising effort caused an uproar after leftists claimed the shirts, which promote patriotism, were “offensive.”

The shirts say, “In Dodge County, we stand for the flag, kneel for the cross.”

The cheerleaders designed the shirts in reference to the ongoing debate over NFL players protesting the Trump administration by kneeling, rather than standing, for the national anthem.

Lisa Hartley, a spokesperson for Dodge County High School, said she’s helped the girls design the fundraising T-shirts every year, and this year’s was meant to promote patriotism and religion.

But not all Dodge County residents see it that way.

“It stands for the hurt of black people getting killed, beat by police officers and getting off with it. So therefore, we as black people, some of us have taken that, to us, that’s what it looks like,” McLeod said.

Another local, Taelor Rye, who graduated from Dodge County High School, said that though the cheerleaders’ hearts might have been in the right place, they didn’t understand the implications the shirts’ message carries.

“I’m disappointed in the lack of consideration that went into the design and distribution of the shirt. What may have been intended simply as a show of pride has greater implications beyond the surface level,” Rye said.

The school is no longer allowing the girls to sell the T-shirts, but White Hat Auto manager Nikki Mullis still sells them out of her shop, according to 13-WMAZ.