Police: ‘we are of the belief that the blame for such crimes lie with the person and not the weapon…’ 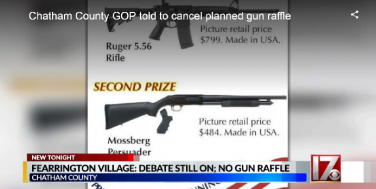 The Chatham County GOP planned to raffle these guns: CBS 17 via YouTube

(Joshua Paladino, Liberty Headlines) The Chatham County (NC) Republican Party planned to raffle a Ruger 5.56 rifle and a Mossberg Persuader pump shotgun at a 2020 candidate forum to be held this September, but the venue told the group they could not have the raffle.

A Fearrington Village spokesperson said venue officials were not told about the gun raffle until they read an article about it on CBS 17, at which point they told the Chatham County GOP that it could not host the event if the raffle was included.

The forum is scheduled for Sept. 10 and will host candidates for statewide office as well as representatives for national candidates, including representatives for President Donald Trump, Sen. Thom Tillis, R-NC, and two challengers to the incumbent North Carolina Senator: Sandy Smith and Garland Tucker.

About a dozen candidates for office in North Carolina will vie for support from members of the Chatham County GOP.

The Fraternal Order of Police lodge in Portage, Indiana faces similar anti-gun pressure, though it has decided to continue with a charity raffle for an AR-15 and a 9mm handgun, WGN TV reported.

Both the Portage Mayor and police have approved the raffle but some residents are upset.

“Give away a car, not a gun,” Lori May, Portage resident, said.

Residents worry that giving a gun to the winner for a $5 raffle ticket will lead to someone irresponsible owning the gun, but the Portage Fraternal Order of Police said the winner will have to pass a background check.

Residents said the raffle comes at a bad time after tragedies in the United States.

“We certainly sympathize with the victims and the families harmed by these events but we are of the belief that the blame for such crimes lie with the person and not the weapon,” the FOP said in a statement. “In years past we have conducted similar raffles and offered this same prize and this is the first time that decision has ever been questioned.”