But their education level relative to natives has declined dramatically… 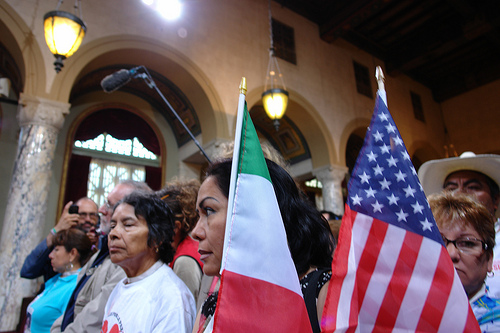 (Kaylee McGhee, Liberty Headlines) As the caravan of immigrants heads toward the U.S. border, a new study shows that the size of the Central America population in America has skyrocketed in recent decades, according to the Center for Immigration Studies.

The Center compiled the latest Census Bureau data, which includes legal and illegal Central American immigrants, and reported that the number of these immigrants has grown from 118,000 in 1970 to 3.3 million in 2017.

This growth is six times faster than the overall immigrant population, the report says.

Most of the immigrants come from three Central American countries: El Salvador, Guatemala, and Honduras.

And though these Central American immigrants are more likely to hold a job than American citizens, they still suffer from high rates of poverty and welfare due to their lack of education.

“A large share of Central Americans struggle in the United States, but it is not because they are unwilling to work. In fact, 76 percent of working-age immigrants from the region had a job in the first part of 2018, compared to 73 percent of the native-born,” the report reads. “The primary reason so many Central Americans are poor and access welfare is that, as their population has grown in the United States, their education level relative to natives has declined dramatically.”

Because of the lack of education, Central American immigrants are twice as likely to live in poverty as native citizens.

This means that many will be dependent on the welfare system.

The Center said although illegal immigrants are barred from welfare programs, “welfare use is common among both recently arrived and more established Central Americans.”

“The high welfare use of Central Americans reflects the fact that, while most work, their education levels mean they often earn low wages in the modern American economy and are unable to support themselves or their own children in many cases and turn to American taxpayers by using the welfare system,” the report states.