For a governor who is allegedly committed to reducing carbon emissions, he seems to have a ‘gigantic blind spot’… 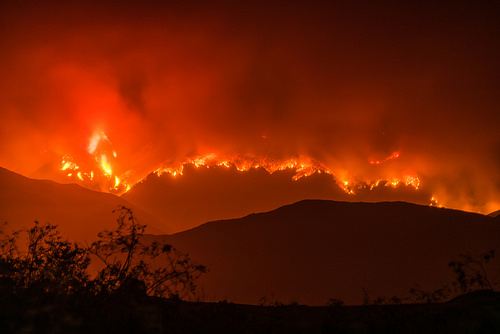 (Lionel Parrott, Liberty Headlines) Right now, California is facing some of the worst wildfires in the state’s history.

Liberals in the Golden State and elsewhere blame climate change.

But as it turns out, the real problem is too many trees – and California lawmakers haven’t taken the problem seriously.

Instead, one of their top environmental policy priorities has been to subsidize the electric vehicle industry.

And because of these misplaced priorities, utility companies who did nothing to cause the fires could be on the hook.

According to an editorial from the Wall Street Journal, this year the Democratic-controlled legislature spent $30 million on cap-and-trade revenue that would go toward clearing over 60,000 acres of forest land.

That sounds like an impressive sum, but the same legislature allocated $335 million for electric vehicle subsidies, most of which are so expensive that they can only be afforded by the extremely wealthy.

That’s in addition to billions of dollars on high speed rail – almost $100 billion, to be exact, on a train that may never be finished.

It’s not like Governor Jerry “Moonbeam” Brown is not aware of the problem.

According to Calmatters, back in 2014, he declared “tree mortality” a state of emergency and said in that year’s State of the State address that California needed to find smarter ways to manage its forests.

The problem is California’s forests have been allowed to grow to vastly unnatural proportions.

In the 19thcentury, a typical forest in the state would have held fewer than 50 trees an acre.

To say that it’s a major fire hazard in a state prone to wildfires is an understatement.

Since then, dozens of agencies have tried tackling the problem, but the trees are a formidable foe.

On average, trees are removed on fewer than 40,000 acres a year, far short of the half-million-acre annual goal set by Cal Fire.

For a governor who is allegedly committed to reducing carbon emissions, he seems to have a “gigantic blind spot,” suggested Republican state senator John Moorlach, who said Brown’s focus on electric cars ignores the role that California’s wildfires play when it comes to greenhouse gases.

Despite the obvious role the overgrown forests are playing in the fires, California lawmakers instead seem to be putting the blame on utility companies – or, at the very least, not doing anything to limit their liability for the fires.

Governor Brown, for his part, has proposed changes to utility fire liability.

This reduced liability would only be in place when companies are found not to be negligent.

But according to Utility Dive, legislators are reluctant to go along with it.

They fear it will be perceived as a bailout – despite the reduced liability not applying to fires before this year and the fact the utilities believe their very existence is threatened if the liability laws are not changed.

If courts use a strict liability interpretation of the state’s “inverse condemnation” doctrine – which provides for even nongovernment entities to compensate for heavily damaged properties – the results could be devastating for the same companies that Californians rely on for electric power.

In overwhelmingly liberal California, it appears the politicians could be said to be missing both the forest and the trees.

But it’s doubtful they’ll pay a price for their lack of foresight.

Check out the article from Utility Dive here.