‘Grow up. Recognize…that we live in the only country in the world where anything like this happens…’ 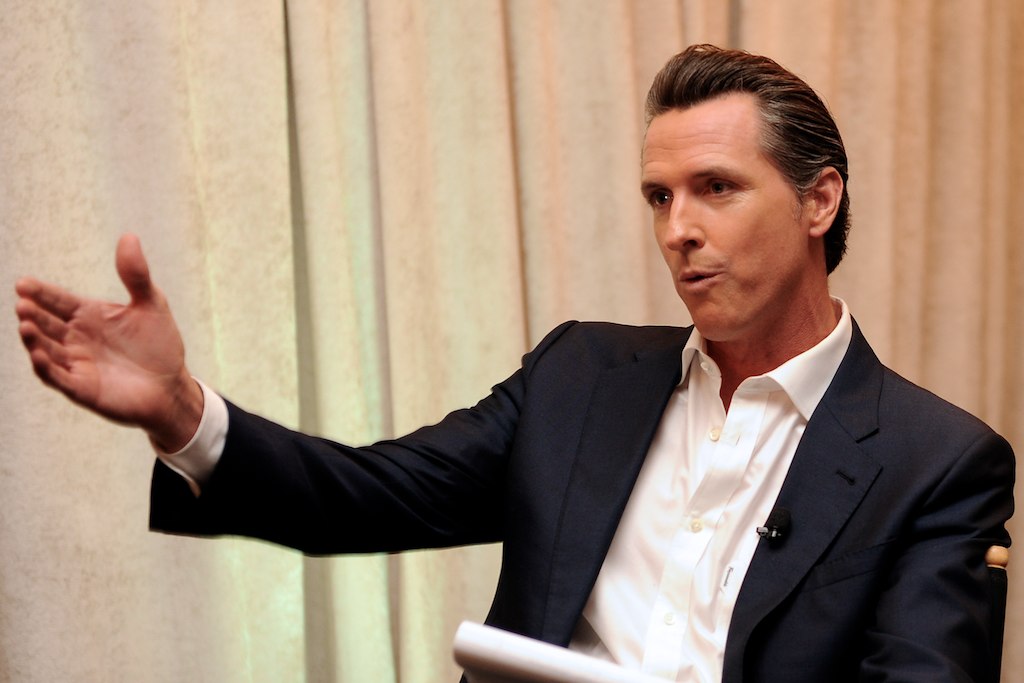 (Phil Willon, Los Angeles Times) California Gov. Gavin Newsom on Saturday called for nationwide background checks on people purchasing ammunition, saying it would be the “next phase” in the heated debate over gun control.

Newsom’s comments came a day after a shooting at a municipal building in Virginia Beach left 12 people dead and six others wounded.

Talking to reporters after a Saturday morning speech at the California Democratic Party convention in San Francisco, Newsom also criticized President Donald Trump for tweeting his condolences to the Virginia Beach community, saying he had failed to do anything to stem the epidemic of gun violence in America.

“Grow up. Recognize and reconcile that we live in the only country in the world where anything like this happens,” Newsom said of the president, ignoring similar violent mass killings in several other nations in recent years. “He has completely failed to address this issue in any meaningful way. The words become insulting the more they are repeated (with) no action to follow them up. His positions are extreme.”

Newsom was the official proponent in 2016 of Proposition 63, which mandated background checks for ammunition purchases, outlawed high-capacity magazines and levied fines for failing to report when guns are stolen or lost. It also created a process for removing guns from people who are convicted of a felony, which puts them in the state’s Armed Prohibited Persons System.

The National Rifle Association has challenged Proposition 63’s gun restrictions in court. Newsom called the NRA’s opposition “disgraceful” and said it will lead to more gun-related deaths. The governor’s focus on gun control policy was heightened by the mass shooting at Borderline Bar and Grill in Thousand Oaks that left 12 people dead in November, just a day after he was elected governor.

In his proposed budget, Newsom has incorporated funding increases for a state program to seize guns from thousands more people who are ineligible to possess firearms because of criminal convictions or mental illness, as well as for the Firearms Violence Research Center at the University of California, Davis.

Newsom helped kicked off the state Democratic Party’s spring convention in San Francisco, where the governor served two terms as the city’s mayor. With 14 Democratic presidential candidates scheduled to address the party delegates, Newsom joked about being the “undercard” and kept his speech brief.

The governor said the presidential candidates would be wise to embrace the progressive policies and ideals of California, instead of only turning to the state for campaign donations.

“It’s not just about the ATM now. It’s about policy. It’s about values. It’s about what we’re framing, not just in the context of resistance but framing a positive alternative to Trump and Trumpism,” Newsom said.

Newsom also criticized Trump’s vow to impose escalating tariffs on goods imported from Mexico until authorities there stop migrants from entering the U.S. illegally. Newsom said that no state has more to lose economically from the policy than California, a top trading partner with Mexico.

“This is a tax on the American people,” Newsom said. “I hope he comes to his senses.”