Breathless coverage has triggered some soul-searching…

(AFP) The BuzzFeed story was a bombshell: President Donald Trump instructed his lawyer to lie to Congress about plans to build a Trump Tower in Moscow.

It sparked immediate calls for impeachment.

Less than 24 hours later, the story was struck down by a rare statement from the office of Special Counsel Robert Mueller, who is investigating whether the Trump campaign colluded with Moscow.

It sparked outrage and calls for them to be punished.

Less than 24 hours later, more video footage emerged, providing more context and casting the encounter in a possibly different light as defenders of the boys rallied round.

Breathless coverage of the BuzzFeed article and the video have triggered some soul-searching in the US media and among many Americans.

The two events were also latched upon by Trump to bolster his long-standing grievance that the press is biased against him.

As for the students of Covington high school in the video, Trump said they were “treated unfairly with early judgments proving out to be false — smeared by the media.”

“Students of Covington have become symbols of Fake News and how evil it can be,” he said.

While no fan of Trump, New York Times columnist Frank Bruni said the coverage of the video of the schoolboys should indeed serve as a warning not to rush to judgment.

President Donald Trump has claimed repeatedly that the mainstream media is biased against him and his supporters/PHOTO: AFP

“We react to news by trying to fit it into the argument that we routinely make, the grievance that we usually raise, the fury or angst or sorrow that we typically peddle,” Bruni wrote.

“We have our narrative, and we’re on the lookout for comments and developments that back it up,” he said.

“The nation’s culture is now enmeshed in a new technology that we don’t yet know how to control,” Brooks wrote. “In this technology, a main activity is proving to the world that your type is morally superior to the other type.

“The Covington case was such a blatant rush to judgment — it was powered by such crude prejudice and social stereotyping — I’m hoping it will be an important pivot point,” he said.

BuzzFeed, despite the denial by Mueller’s office, is sticking by its story that the president directed his former lawyer Michael Cohen to lie to Congress about the Trump Tower Moscow plans.

But a number of commentators — on both the left and the right — have questioned the haste with which the BuzzFeed article was taken at face value and the fevered speculation it triggered about impeachment. 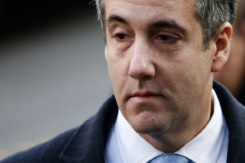 BuzzFeed is sticking by its story that US President Donald Trump directed his former lawyer Michael Cohen, pictured in 2018, to lie to Congress/PHOTO: AFP

Jonathan Turley, a George Washington University law professor, said the story launched a media frenzy even though it was “long on allegations and short on evidence.”

“What is most striking about this boom and bust pattern is how it is repeated with such regularity and so little scrutiny in the media,” Turley said in an opinion piece for The Hill.

“The news outlet’s credibility is on the line in a big way, and some journalists are predicting that this episode will not end well,” Stelter said.

Alan Dershowitz, a prominent constitutional lawyer who has defended the president on cable news, said the reaction to the BuzzFeed report pointed to a wider problem with what he called the “‘get Trump’ media.”

“Despite the obvious weakness of the BuzzFeed report, many members of the ‘get Trump at any cost’ brigade were busy digging Trump’s political grave and getting ready to dance on it,” he said.

Native Americans protest outside the Diocese of Covington offices to call for a dialogue with students, parents and staff from Covington Catholic High School. Videos emerged showing a confrontation between boys from the private school and an elderly Native American man at a rally a few days prior in Washington, DC, which has triggered widespread criticism and debate.

Jim Rutenberg, media columnist for The New York Times, said part of the problem is the “insatiable appetite of social media and cable news for fresh material” about Trump and ferocious competition among news outlets “trying to break the Big One.”

Bob Woodward, the Washington Post reporter whose Watergate coverage led to Richard Nixon’s resignation, told the Times he was thankful he was no longer in the trenches of daily reporting.

“The hydraulic pressure in the system is just so great,” Woodward said. “The impatience of the internet — ‘give it to us immediately’ — drives so much, it’s hard to sort something like this out.”