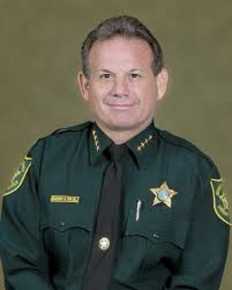 The governor replaced Israel with former Coral Springs Police Sgt. Gregory Tony, 40, who has a background in active-shooter training and becomes the first black sheriff in Broward County’s history.

DeSantis announced the suspension from the Broward Sheriff’s Office headquarters while the displaced former sheriff prepared his response from a church in northwest Fort Lauderdale.

“I have no interest in dancing on Scott Israel’s political grave,” DeSantis said, “but suffice it to say the massacre might never have happened had Broward had better leadership in the sheriff’s department.”

In his executive order, the governor cited incompetence and neglect of duty.

The suspension caps a nearly yearlong series of revelations that exposed the failure of Broward sheriff’s deputies to run in to save children at Marjory Stoneman Douglas High School. Some deputies said they couldn’t remember when they’d last been trained to handle an active shooter, even though the agency had a confused, chaotic response to a mass shooting at Fort Lauderdale-Hollywood International Airport in 2017.

Israel’s leadership of the agency has come under intense scrutiny, and he’s received extensive criticism over the massacre in which 17 people were killed and 17 wounded on Valentine’s Day.

Though he enjoyed strong popularity in Broward before the shooting, Israel’s star fell in the aftermath, particularly after a disastrous appearance on CNN in which he praised his own leadership and glossed over his agency’s mistakes.

Israel vowed to vigorously fight the suspension, accusing the governor of carrying out a political mission because the sheriff had spoken out against gun violence.

“This was about politics, not about Parkland,” Israel said.

Backed by religious leaders and supporters, Israel said he vehemently disagrees with the legal and factual basis of DeSantis’ suspension order.

Instead of his usual green BSO uniform, Israel wore a blue pinstripe suit and red tie. He said he would seek every avenue to contest the suspension, including making his case in a hearing before the Florida Senate.

Israel’s attorney Stuart Kaplan said while mistakes occurred, the shooter is the only person responsible for the lives lost at Marjory Stoneman Douglas High School.

Many family members of victims and people in Parkland, where the school is located, blame Israel for the agency’s handling of the teenage killer during interactions before the shooting, and for the way it handled the unfolding tragedy. Coral Springs officers showed valor, running into the school. They reported being routinely trained to run toward gunfire. BSO deputies, meanwhile, hid behind trees and patrol cars.

“On Feb. 14, my daughter died on the third floor of MSD running down the hallway from an active shooter,” one of the grieving parents, Fred Guttenberg, said Friday at the announcement. “One more second, and she makes it into the stairwell. She needed one more second. If anybody wants to know what failure means, and lack of response, my daughter would have lived if somebody could have just given her one more second.”

The Florida Constitution gives the governor power to suspend public officials for “malfeasance, misfeasance, neglect of duty.” Governors routinely remove public officials who are arrested or charged with crimes, but it is unusual to remove an officeholder who does not face criminal charges.

It was the second removal of a countywide elected official in Broward in two months. Former Gov. Rick Scott suspended elections supervisor Dr. Brenda Snipes at the end of November. Snipes had already submitted a letter of resignation.

Among those present at the sheriff’s headquarters were state Rep. Chip LaMarca, R- Lighthouse Point.

“It’s important that I am here to support the decision,” LaMarca said.

Major Kevin S. Shults, who was in charge of training, also resigned.

Dale, Kinsey and Shults were among many high-ranking officials Israel hired from his former workplace, Fort Lauderdale Police Department.

Major Chadwick Wagner, a former Hollywood police chief, who served as BSO human resources director, said his reason for leaving included “the unjust decision by Gov. Ron DeSantis to remove Broward County Sheriff Scott J. Israel. Sheriff Israel has been twice elected by Broward County residents. This is a decision that only the resident voters of Broward County should decide.”

Col. James Polan retired effective Thursday, and did not comment on his form.

Broward Sheriff’s Sgt. Anthony Marciano, president of the Federation of Public Employees union, representing detention deputies, courtroom deputies and others, said Israel made some missteps: He spoke publicly too soon, when investigations were still going on; he didn’t take responsibility; and he unnecessarily “poked a big bear that he didn’t need to poke” when he addressed the National Rifle Association, Marciano said.

But Marciano said Israel’s fate would have better been left to voters.

“I listened to all the MSD commission meetings, and the sheriff said one thing that should have resonated everybody: ‘You can’t teach courage to people,’” Marciano said.

The new sheriff, Tony, worked for 12 years as an officer and then sergeant in Coral Springs. His former boss, Coral Springs Chief Clyde Parry, said Tony had a “bright future” and he was sorry to see him leave the agency in 2016.

Tony and his wife, Holly, a nurse, operate Blue Spear Solutions, which specializes in active-shooter training and provides threat assessments on schools and other businesses. Tony was connected with the new governor by Andy Pollock, whose daughter Meadow was killed in the shooting.

DeSantis said Tony was “tailor-made” for the job.

Tony is building a transition team and is expected to name his undersheriff as early as this weekend, a source told the Sun Sentinel.

“I am not here for any type of political grandiose agenda,” Sheriff Tony said in his public remarks Friday. “I’m here to serve.”