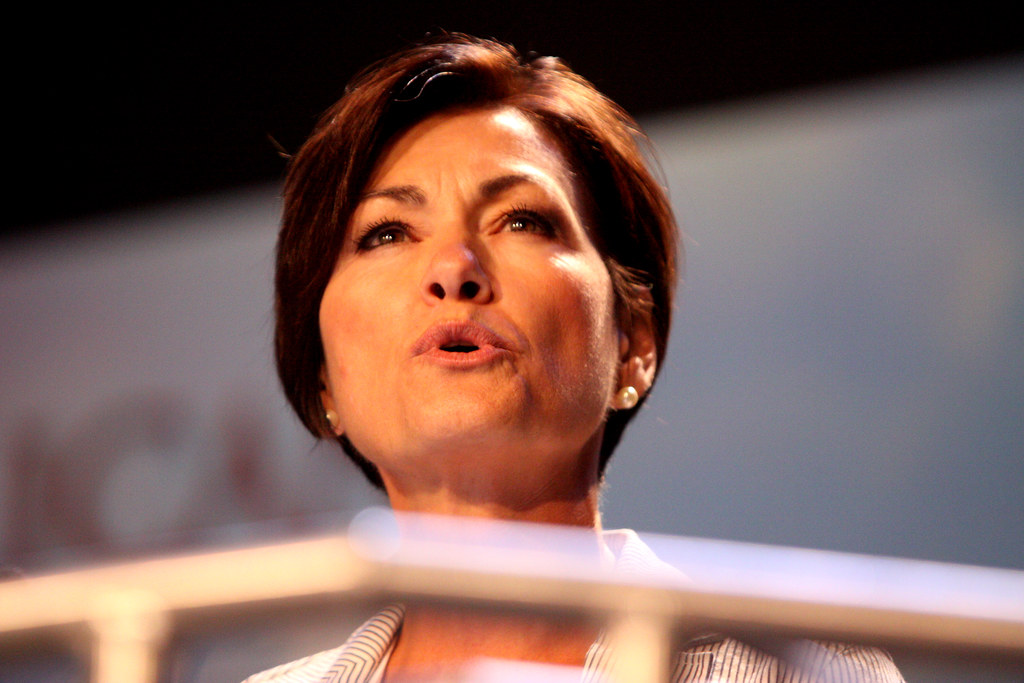 (Liberty Headlines) An SUV carrying Iowa Gov. Kim Reynolds hit a Black Lives Matter protester who was trying to block the vehicle Tuesday as she left an event in northern Iowa, but the Iowa State Patrol blamed the protester and said there was little contact.

The state patrol confirmed the SUV struck the protester, who was among about two dozen Black Lives Matter activists who had traveled 90 miles from Des Moines to Ackley. Members of the always-disruptive group weren’t allowed into the event at Family Traditions Meat, a small processor, so they gathered at the end of a driveway and tried to block the governor’s SUV.

Jaylen Cavil, a Black Lives Matters organizer, told the Des Moines Register that he stood in the driveway in the hopes that Reynolds would roll down a window and talk with protesters.

“I was standing right in front of the car and I just stood there. I was like, ‘I’m going to stand here. Surely the driver of the governor is not going to hit me with her car. This is the governor, my governor, who’s supposed to be representing me. I’m sure that her car is not going to intentionally hit me.’ I was wrong,” he said.

Cavil said the impact spun him around and lifted him onto the SUV’s hood, but he wasn’t hurt.

“I 100% think they intentionally hit me,” he said. “There’s no way that this driver could not see me right in front of his car.”

Afterward, Cavil said an Iowa State Patrol trooper began yelling at him and called him an idiot.

Although patrol spokesman Sgt. Alex Dinkla acknowledged what happened, he said in a statement that there was little contact between the protester and the SUV, which was driven by a state trooper. Dinkla also blamed the protester for approaching the SUV and causing his contact with the vehicle.

Dinkla said the protester didn’t appear to be hurt and didn’t request medical attention. Protesters then shouted at authorities and blocked state patrol troopers from leaving the area, Dinkla said.

Black Lives Matter activists have protested outside Reynolds’ office and attending events in hopes of pressuring her to quickly sign an executive order ending Iowa’s status as the only state that automatically revokes felons’ voting rights. They must individually petition the governor to restore their rights.

Reynolds, a Republican, had proposed changing the Iowa Constitution to automatically restore voting rights to felons, but she agreed to instead sign an executive order after Senate Republicans blocked legislative action for two years. Reynolds hasn’t given a specific timeline for when she will sign an order or give details about whether felons will need to take additional steps before gaining their voting rights.

Pat Garrett, the governor’s spokesman, didn’t respond to a text message from The Associated Press seeking comment on the matter.