‘We build an alternative container for all of us to connect, outside of the white gaze…’ 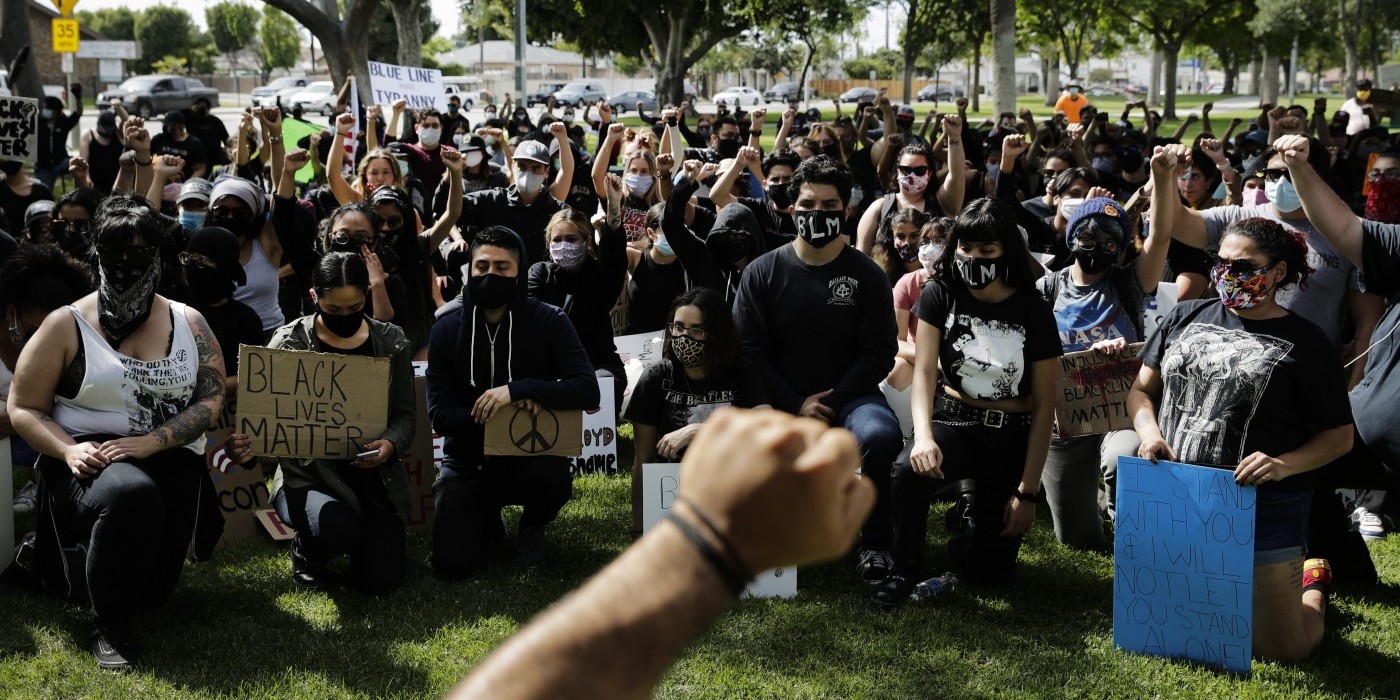 Demonstrators raise their fists during a protest over the death of George Floyd in Anaheim, Calif. / PHOTO: Associated Press

(Liberty Headlines) Black activist Gil Scott–Heron gave voice to the black-liberation counterculture with his 1970 declaration that “the revolution will not be televised.”

But with leftists now firmly in control of most media platforms, enabling the race-baiting rioters to collaborate with mega-billionaire globalist oligarchs, pro-Marxist journalists, Antifa-backing academics and others, it turns out that it will be televised after all.

Black Lives Matter activists are now planning to hold a virtual “convention” on Aug. 28, a day after the Republican National Convention is scheduled to conclude.

The main purpose of doing so appears to be a concerted effort to buck the time-honored traditions that allow each party the spotlight to promote its message during their respective nominating conventions.

The also aim to pressure establishment Democrats prior to their virtual gathering by producing a new political agenda that will further capitalize on the success of the protests that followed George Floyd’s death.

Already, Democrat officials have sought to thwart President Donald Trump by denying him the assurances that his original venue location in Charlotte, NC, would be able to host a full-capacity crowd during the Aug. 24-27 GOP convention.

But with Trump simply relocating the speech to more amenable Jacksonville, Fla., fuming left-wing radicals must find other ways to attempt to derail his populist appeal.

The 2020 Black National Convention will feature conversations, performances and other events designed to develop a set of demands ahead of the November general election, according to a Wednesday announcement shared first with The Associated Press.

The convention is being organized by the Electoral Justice Project of the Movement for Black Lives, a coalition of more than 150 organizations. In 2016, the coalition released its extremist “Vision for Black Lives” platform, which called for public divestment from mass incarceration and for adoption of policies that can improve conditions in Black America.

“What this convention will do is create a Black liberation agenda that is not a duplication of the Vision for Black Lives, but really is rooted as a set of demands for progress,” said Jessica Byrd, who leads the Electoral Justice Project.

At the end of the convention, participants will ratify a revised platform that will serve as a set of demands for the first 100 days of a new presidential administration, Byrd said. Participants also will have access to model state and local legislation.

“What we have the opportunity to do now, as this 50-state rebellion has provided the conditions for change, is to say, ‘You need to take action right this minute,’” Byrd said. “We’re going to set the benchmarks for what we believe progress is and make those known locally and federally.” 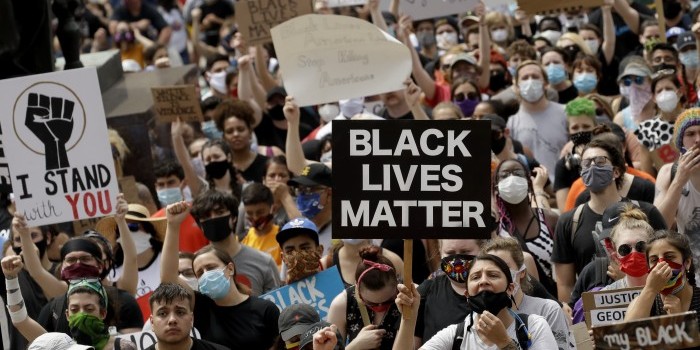 People hold signs as they listen to a speaker in front of city hall in downtown Kansas City, Mo. / PHOTO: Associated Press

The August convention will happen on the same day as a commemorative, in-person march on Washington that is being organized by Sharpton, who announced the march during a memorial service for George Floyd.

The convention was originally planned to happen in person, in Detroit, the nation’s blackest major city. But as the coronavirus pandemic exploded in March, organizers quickly shifted to a virtual event, Byrd said.

Initial work to shape the new platform will take place Aug. 6 and 7, during a smaller so-called People’s Convention that will virtually convene hundreds of delegates from Black-led advocacy groups.

The process will be similar to one that was produced by the first-ever Black Lives Matter convention, which was held in Cleveland in 2015.

The first platform included early iterations of the demand to defund police that now drives many demonstrations.

Other platform demands, such as ending cash bail, reducing pretrial detention and scrapping discriminatory risk-assessment tools used in criminal courts, have become official policy in a handful of local criminal justice systems around the U.S.

Cliff Albright, co-founder of Black Voters Matter, which organizes in 15 states, said the 2020 Black National Convention will deepen the solutions to so-called systemic racism and create more alignment within the movement.

“We’re in this stage now where we’re getting more specific about how all of this is connected to our local organizing,” Albright said. “The hope is that, when people leave the convention, they leave with greater clarity, more resources, connectivity and energy.”

The coalition behind the convention includes Color of Change, BYP100, Dream Defenders and the Black Lives Matter Global Network, which has 16 official chapters nationwide.

Convention organizers said this year’s event will pay tribute to the historic 1972 National Black Political Convention in Gary, Indiana, which concluded with the introduction of a national Black agenda.

That convention came after several tumultuous years that included the assassinations of Malcolm X and the Rev. Martin Luther King Jr. and outbreaks of civil unrest, all of which were seen as blows to the civil rights movement.

Like any large political gathering, consensus is not guaranteed. The National Black Political Convention caused divisions over the anti-Semitic statements of some participating organizations. Those attacks continue in the modern era with radical groups like the Louis Farrakhan-led Nation of Islam.

Ultimately, the agenda prompted a leader of the NAACP, the nation’s oldest civil rights organization, to sever ties with the convention.

Somewhat similarly, the Vision for Black Lives platform and its characterization of Israel as an “apartheid state” committing mass murder against Palestinian people has been denounced by several Jewish groups, even those on the Left that would otherwise have supported the movement.

However, Byrd celebrated the fact that the growing movement was not simply beholden to the influence of the left-wing establishment and that its growing strength, instead, forced the party to be beholden to its demands.

“We don’t just say ‘black lives matter’ and beg people to care,” he continued. “We build an alternative container for all of us to connect, outside of the white gaze, to say this is what we want for our communities.”