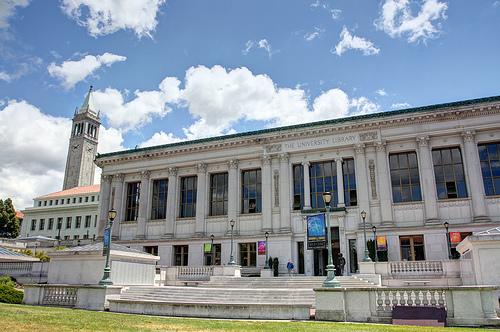 Library at UC-Berkeley/Photo by John-Morgan (CC)

(LifeZette) Like many public institutions nationwide, the University of California-Berkeley continues to wave the flag for Left-leaning causes — and supporting undocumented students is among its top priorities.

A hefty pledge of financial assistance from UC Berkeley Chancellor Carol Christ toward services for DACA (Deferred Action for Child Arrivals) students is the latest move, according to The Daily Californian, a student-run newspaper that serves the Berkeley campus and the surrounding community.

The promise of assistance apparently was a knee-jerk reaction to a meeting last week with Luis Mora, a Berkeley transfer student who’d been detained by Border Patrol and held in custody for more than two weeks by ICE (Immigration and Customs Enforcement).

He was a later released on bond.

But the chancellor could be skating on thin ice.

Last month, The Daily Californian rebuked UC Berkeley and also Christ in a scathing op-ed by the paper’s editorial board for not doing enough to support Mora: “The University of California has long advertised its history of supporting Deferred Action for Childhood Arrivals, or DACA, students. But what about the undocumented students who are not DACA recipients, such as Mora? The political science major and pre-law student deserves as much institutional support as any other student admitted to the university.”

According to an article in Campus Reform, UC Berkeley senior director of strategic communications Janet Gilmore said that while the university has had a center for undocumented students since 2012, Christ is seeking to find “additional office space,” as the staff has increased in size over the past few years.

Gilmore also told LifeZette, “The $800,000 funding is a mix of funds from donors, the UCOP [Office of the President] … and other UC Berkeley campus funds.”

She was not able to confirm whether or not any of those funds would be coming directly from American taxpayers.

But she did tell LifeZette she would be “looking into it.”

What many fail to realize in these scenarios is that beyond the college campus is the real world — where the rule of law still matters to most.

“As former President Obama pointed out when he established DACA — which he said on 22 prior occasions that he did not have the constitutional authority to do — beneficiaries are still illegal aliens,” Ira Mehlman, media director at the Federation for American Immigration Reform (FAIR), told LifeZette.

Mehlman also said, “DACA simply asserted that the government would not enforce the law while they held that status and would allow them to work in this country. Obama also made it clear that subsequent presidents might end the program.”

And “when their deferrals end, they will revert to the status they had prior to the creation of the program.”