‘Peaceful protests were hijacked by criminals with a dangerous, destructive agenda. Now, innocent Georgians are being targeted, shot, and left for dead…’ 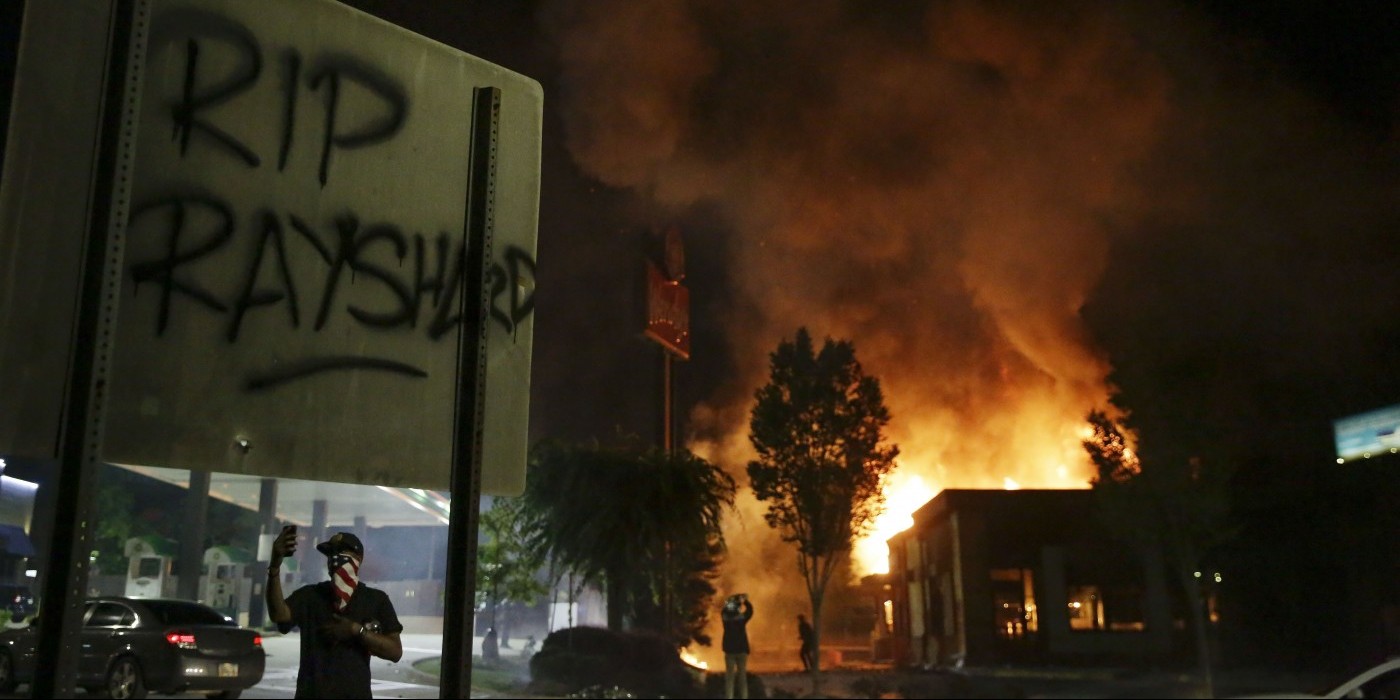 “RIP Rayshard” is spray-painted on a sign as flames engulf a Wendy’s restaurant where Rayshard Brooks was shot and killed by police in Atlanta. About five months before he was killed by Atlanta police. / PHOTO: Associated Press

(Liberty Headlines) The mayor of Atlanta said Tuesday that she doesn’t agree with the Georgia governor’s order to mobilize the National Guard in her city as a surge in violence became a political talking point.

Gov. Brian Kemp declared a state of emergency on Monday and authorized the activation of up to 1,000 Guard troops after a weekend of gun violence in Atlanta left five people dead, including an 8-year-old girl.

The Guard troops will provide support at sites including the Capitol and governor’s mansion, freeing up state law enforcement resources to patrol other areas, according to a statement from Kemp’s office. There was no visible presence of Guard troops at either site Tuesday morning.

“Peaceful protests were hijacked by criminals with a dangerous, destructive agenda. Now, innocent Georgians are being targeted, shot, and left for dead,” the Republican governor said.

Republican U.S. Rep. Doug Collins of Georgia—one of the state’s most visible national political figures, who is currently running for Senate to replace the recently retired Johnny Isakson—said Tuesday he agreed with the governor’s decision

Collins said lawless areas must not be allowed to exist in Atlanta or any other American city.

But despite issuing her own condemnations of the violence and decrying the chaos that criminals had unleashed, Democrat Mayor Keisha Lance Bottoms complained that d Kemp issued his order without asking if the city needed extra help.

Facing mass resignations from its police force over the poor management and lack of support during recent race riots, Bottoms said the city had already been coordinating with the Georgia State Patrol.

However, “at no time was it mentioned that anyone felt there was a need for the National Guard to come in,” she said on ABC’s “Good Morning America.”

Meanwhile, Nikema Williams, the chairwoman of the Democratic Party of Georgia, went a step farther by claiming Kemp’s decision to involve more law enforcement officials in the effort to restore order was reckless.

On the contrary, she suggested that deploying military troops on otherwise calm city streets could provoke more violence.

“His choice to deploy National Guard troops for today’s selfish purpose is outrageous and will endanger lives,” she said in a statement.

Secoriea Turner was riding in a car with her mother and another adult Saturday night near a Wendy’s that was burned after the recent police shooting of Rayshard Brooks. The site has become something of a ground-zero for the radical protesters in the city.

When they tried to enter a parking lot, they were confronted by “a group of armed individuals” blocking the entrance, police said. The girl’s mother, Charmaine Turner said shots were fired and Secoriea was hit before they could make a U-turn.

Saturday night’s fatal shooting of Secoriea prompted a $10,000 reward for information as authorities continue to search for at least two people who opened fire on the car she was riding in.

Secoriea was killed during a particularly violent weekend in Atlanta. Over the holiday period from Friday through Sunday, 31 people were shot in 11 different incidents, Atlanta police said.

When asked about a surge in violence in the city, the mayor said she thinks people are anxious and frustrated about the coronavirus pandemic and high-profile cases of police brutality.

“I think it’s just a perfect storm of distress in America,” said the mayor, who learned Monday that she, her husband and one of their four children have tested positive for COVID-19.