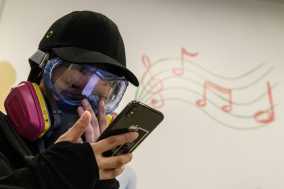 (AFP) Apple on Thursday removed an app criticised by China for allowing protesters in Hong Kong to track police, as Beijing steps up pressure on foreign companies deemed to be providing support to the pro-democracy movement.

The tech giant’s pulling of HKmap.live was blasted as bowing to China and comes as high-profile brands, including the NBA and its Houston Rockets franchise, come under pressure from communist authorities over perceived support for democracy demonstrations in the financial hub.

Chinese state media this week tore into the app, which collates information on police locations submitted by users, charging that it was helping “rioters”.

Communist Party mouthpiece The People’s Daily said by stocking the app, Apple was “mixing business with politics, and even illegal acts”.

On Thursday the app was no longer available on Apple’s Hong Kong App Store.

“We have verified with the Hong Kong Cybersecurity and Technology Crime Bureau that the app has been used to target and ambush police,” said a notification sent by Apple and published on the HKmap.live’s Telegram channel, which has more than 70,000 subscribers.

“Criminals have used it to victimise residents in areas where they know there is no law enforcement,” it continued.

HKmap.live’s makers denied their app encouraged criminal activity, and lashed out at Apple’s removal as “censorship” and “clearly a political decision to suppress freedom”.

The online and Android versions of HKmap.live were still available.

Hong Kong has been rocked by four months of increasingly violent protests, initially against a now-shelved extradition law, but whose focus has now shifted to broader pro-democracy aims.

The city’s once-respected police force has become the target of anger over what demonstrators say is excessive violence including the use of live rounds to quell unrest.

Hong Kongers took to social media to protest the removal.

“Many people are scared of police using tear gas and rubber bullets, so they use the app and make detours to avoid the uncontrolled police thugs,” pro-democracy lawmaker Charles Mok wrote on Facebook.

“Does Apple know it has the function to protect personal safety?”

And a user on the Reddit-like forum LIHKG said: “The app actually tells people where not to go. It ensures residents’ safety.”

Apple’s decision comes after the tech giant earlier this week removed the Taiwan flag emoji from its iOS 13 update for users in Hong Kong and Macau. The emoji was available on phones whose Apple account was based in other jurisdictions.

Quartz told The Verge website it believes the ban was due to the publication’s coverage of the protests, and said it also received a notice from Apple that its mobile app “includes content that is illegal in China”.

China accounts for around a sixth of Apple’s overall sales, and is the company’s third largest market after the US and Europe.

But the Silicon Valley giant has struggled in recent years, lagging behind local rivals.

The iPhone manufacturer had the fifth biggest market share in the country in the second quarter at 6.7 percent — well behind leader Huawei and other domestic companies, according to data from the Chinese-owned International Data Corporation.

Weibo users in China attacked “rotten Apple” for allowing the app to be available in the first place, calling the company’s actions “imperialism”.

“Apple is killing itself!” one wrote. “Do you want to be left out in the cold like the NBA! So I promise you, I will never buy an Apple product again!”

The tech company joins a long list of international brands that have fallen foul of China’s increasingly nationalist consumer base, who brook no dissent from the official Communist Party line on issues ranging from Hong Kong to Taiwan to Xinjiang.

Corporate sponsors abandoned the team, despite apologies from figures including megastar James Harden.

After an initial wobble, criticised in the US, the NBA lined up behind the right of its players and officials to speak their mind.