It’s a lie, because Apple depends on fossil fuel and the dreaded nukes… 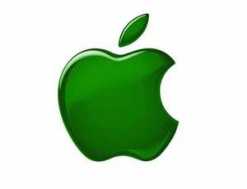 (National Legal and Policy Center) Media consistently pour the love on the progressive moralizers at Apple (except for occasional slams about Chinese labor conditions), and nowhere are they more willing to amplify phony claims about the company’s “goodwill” achievements than when it comes to the environment.

All corporate mouthpieces need to do in Cupertino is post some propaganda on their press release page about “renewables” and the tech bloggers and business media drool.

Lazy-minded (and just plain lazy) liberal journalists eagerly adopt, repurpose and regurgitate even the most outrageous and debunk-able of claims, and dis-serve their reading public by delivering the misinformation.

Here’s how some of the uncritical beat writers (representative of most of those who wrote about it) disseminated the release:

“As part of its commitment to combat climate change and create a healthier environment, Apple today announced its global facilities are powered with 100 percent clean energy,” the company reported. “This achievement includes retail stores, offices, data centers and co-located facilities in 43 countries — including the United States, the United Kingdom, China and India.”

“We’re committed to leaving the world better than we found it,” said CEO Tim Cook. “After years of hard work we’re proud to have reached this significant milestone.”

Except it’s a lie, and an easily confirmable one.

So Apple says its massive cloud services, product manufacturing, sales and administrative operations totally run – and can fully depend upon – power generated by wind, solar, biogas, and other alternative sources of energy?

If that it is true, then Apple should be forced to prove it, and shut down all their nuclear, natural gas and coal-powered electricity sources – and see how well Siri functions without the wind blowing. See how well Apple Music serves up Springsteen on a cloudy day. See how well iMacs back up to the cloud exclusively on agricultural waste emissions.

It won’t happen, because Apple depends on fossil fuel and the dreaded nukes. Data farms need, more than anything else, for electricity to be consistent and uninterrupted.

Only coal, natural gas, and nuclear can generate that kind of power.

“Unless a home, business, or other establishment is disconnected from the electricity grid,” writesthe Institute for Energy Research, “it receives power from the same sources (coal, natural gas, nuclear, hydro, etc.) as the rest of the customers on the same power grid.

“Companies, cities, and other entities that claim a ‘100 percent renewable’ status (not to mention politicians granting them credence) are deceiving the public—it’s a dishonest habit that has become all too common with wind and solar activists. In reality, these entities are paying for a certain volume of energy to be produced from renewable sources, but they are not necessarily using said energy.”

**MORE COVERAGE OF APPLE at LibertyHeadlines.com**

What Apple is doing instead is gaming the power-producing sector, and the mega-subsidies that come along with government regulation, in their favor.

So when the company builds solar projects and wind farms, it is for its financial benefit through tax breaks, accelerated depreciation, and selling the expensive renewable electricity to the utility grid — not to mention getting big discounts on the actual power they get off the grid from the likes of Duke Energy and NV Energy.

Then there are the Renewable Energy Credits that companies and municipalities buy and sell in an exchange of accounting tricks, using certificates from wind and solar generators to “offset” the data center hogs’ electricity consumption.

Meanwhile they hum along drawing from the grid, which is 86 percent powered by coal, natural gas and nuclear.

It’s such a delicately rigged system that it’s no wonder when Apple gets nervous when the Trump administration threatens to blow away a small piece of its framework by repealing scams like the Clean Power Plan, which only serves to make cheap energy expensive, so expensive energy seems cheap.

And that’s 100 percent the truth; no myth…Original Source…