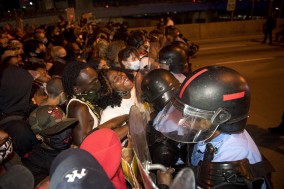 (Liberty Headlines) More than 10,000 people have been arrested in protests — many of which were co-opted by criminal thugs and anarchist disruptors, devolving into riots — in the wake of George Floyd‘s death, according to an Associated Press tally of known arrests across the U.S.

The count has grown by the hundreds each day as protesters spilled into the streets and encountered a heavy police presence and curfews that give law enforcement stepped-up arrest powers.

Los Angeles has had about a quarter of the national arrests, followed by New York, Dallas and Philadelphia. Some of the arrests have been for low-level offenses such as curfew violations and failure to disperse. Hundreds were arrested on burglary and looting charges. Nearly all of the major cities affected by the chaos are dominated by Democrat political leadership.

It is not known how many of the people arrested were locked up. The protesters are often placed in zip-ties and hauled away from the scene in buses.

In Los Angeles, an online fundraising campaign has gathered $2 million so far to help some 2,700 people arrested in demonstrations since Floyd died on May 25 in Minneapolis.

Kath Rogers, executive director of the Los Angeles office of the National Lawyers Guild, said she was surprised by the huge number of arrests in that city. The office is calling on those arrested to be in contact so they can be part of the group’s mass defense. So far, they have heard from about 400 people, she said.

She said some people had been swept up in the arrests because they were in the wrong place at the wrong time, like a woman who was simply going for an evening walk and wasn’t part of the protest. Or a young man who was taking pictures of the looting with his phone and then was arrested for looting.

“I’ve been here for two years and we go to hundreds of demonstrations, but I’ve never seen rubber bullets flying like this, tear gas used this way,” she said.

Los Angeles Chief Michel Moore told the city’s Police Commission Tuesday the bulk of the arrests, about 2,500, were for failure to disperse or curfew violations.

The rest were for crimes including burglary, looting, assaults on police officers and other violence, Moore told the panel, which functions as the police department’s civilian oversight board.

The only other U.S. city with an arrest toll that comes close to Los Angeles’s is New York, with about 2,000, according to AP’s tally. Mayor Bill de Blasio has been criticized — even by Gov. Andrew Cuomo — for his weak leadership during the unrest.