Half the ‘Squad’ throws in with the socialist candidate…

EDITOR’S NOTE: This article has been updated.

(AFP) Three progressive female Democrats in the US Congress are endorsing Bernie Sanders for president, making for an intriguing alliance between a group representing youth, change, and racial diversity and a 78-year-old white man seeking the White House.

The endorsements comes after the party held its latest debate for the 12-plus pack of candidates seeking the Democratic nomination to take on President Donald Trump in November 2020.

Sanders, a senator from Vermont, is running third behind former vice president Joe Biden, and Senator Elizabeth Warren, who is on the progressive wing of the party, as is Sanders, who is a self-described socialist.

These three women are Alexandria Ocasio-Cortez, a 30-year-old firebrand from New York; Ilhan Omar, born in Somalia; and Rashida Tlaib of Michigan, who has Palestinian roots.

They are three quarters of what is popularly called the “Squad” — an outspoken, leftist grouping.

Omar, the first black Muslim woman in Congress, said Tuesday night she supports Sanders, a Jew who hails from Brooklyn, for president.

“Bernie is leading a working-class movement to defeat Donald Trump that transcends generation, ethnicity and geography,” Omar, 38, said in a statement.  ‘Special guest’ 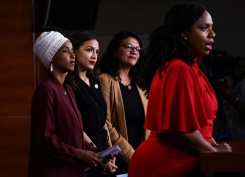 AFP US lawmakers Rashida Tlaib, Alexandria Ocasio-Cortez, Ilhan Omar and Ayanna Pressley give a press conference at Congress on July 15 of this year

During the debate Tuesday night in Ohio, Sanders sought to assure Americans that he is fit enough to run for president despite having suffered a mild heart attack recently.

And he said he would be joined by a “special guest” at a big campaign rally Saturday in the New York borough of Queens.

News reports say that guest is Ocasio-Cortez, the new face of the most leftist wing of the Democratic Party. The electoral district she represents includes part of Queens.

AOC, as she is popularly known, calls herself a Democratic socialist like Sanders, who is nearly 50 years her senior and has held a seat in Congress since 1991.

CNN reported that Tlaib, 43, is also expected to endorse Sanders. On Tuesday she retweeted a message from Omar noting her cooperation with Sanders in the House of Representatives.

The endorsement plans of the fourth member of the Squad, Ayanna Pressley, are not immediately known.

The Sanders campaign is hoping for a boost from these shows of support as he battles to catch up in the polls with Warren.

When he fought Hillary Clinton for the nomination in 2016, Sanders — who represents a state that is largely white and rural — was seen by some Americans as being out of touch on racial issues.

As he tries to woo younger and more racially diverse people this time around, Sanders has already won the endorsement of the rap artist Cardi B, who is from the Bronx, another New York borough that includes part of Ocasio-Cortez’s electoral district.