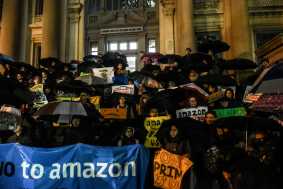 (AFP) Amazon announced Thursday it was abandoning plans for a new headquarters site in New York City, citing opposition from local politicians angry at the huge subsidies being offered to one of the world’s most successful companies.

The New York neighborhood of Long Island City had been one of two locations Amazon selected last year after a long search for a second headquarters or “HQ2.” The online giant promised the sprawling complex would create 25,000 new jobs — in exchange for nearly $3 billion in state and city incentives.

“While polls show that 70 percent of New Yorkers support our plans and investment, a number of state and local politicians have made it clear that they oppose our presence and will not work with us to build the type of relationships that are required to go forward with the project,” Amazon said in a statement.

“We are disappointed to have reached this conclusion — we love New York, its incomparable dynamism, people, and culture — and particularly the community of Long Island City, where we have gotten to know so many optimistic, forward-leaning community leaders, small business owners, and residents.”

Amazon said it would “continue growing” its workforce in New York which includes some 5,000 people.

Amazon said it would not reopen the bidding process but would “proceed as planned” with a headquarters site in Northern Virginia and a logistics center in Nashville, Tennessee.

It added that it “will continue to hire and grow across our 17 corporate offices and tech hubs in the US and Canada.”

The New York plan had been endorsed by Mayor Bill De Blasio and Governor Andrew Cuomo, but ran into fierce opposition from some local politicians and community activists, including newly elected Democratic Representative Alexandria Ocasio-Cortez, whose district borders the New York site.

In addition to complaints about the scale of the incentives, critics voiced concerns that the promised jobs could inflate an already overpriced housing market and strain infrastructure.