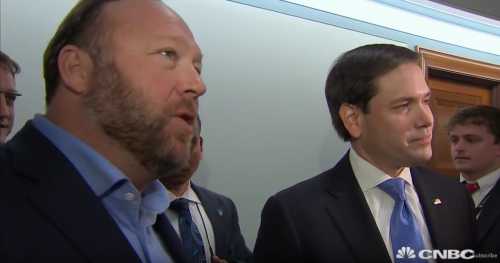 (Denis Slattery, New York Daily News) Infowars host Alex Jones unloaded on Sen. Marco Rubio, calling him a “frat boy” as he ranted and raved his way through the halls of Congress Wednesday ahead of Senate hearings on social media.

Jones, a radio host who has been banned from several social media platforms for spreading hate speech, crashed a Rubio interview and berated the Florida Republican.

Jones mocked the lawmaker’s laugh after Rubio said he didn’t know who Jones was before the back-and-forth quickly escalated.

“I don’t know who you are, man,” Rubio said as Jones repeatedly interrupted him.

When Jones reached out to touch Rubio’s shoulder, the senator warned him to stop.

“That’s why you didn’t get elected. You’re a snake,” Jones responded, touching the senator’s shoulder to keep his attention. “Marco Rubio the snake. A little frat boy here.”

The heated exchange escalated as the senator told Jones to “get your hand off me, don’t touch me. … I’ll take you out myself, I don’t need security.”

Jones—who has argued that 9/11 was an “inside job” and that the Sandy Hook school shooting was staged—continued to lash out at Rubio.

Jones, who runs the facts-challenged Infowars website, told reporters he was at the Senate Intelligence Committee’s hearing to “face my accusers.”

Jones was recently banned from Twitter for a week, Facebook took down several of his pages for violating “community standards,” and his videos were stripped from YouTube last month.

On Wednesday, he accused members of the media of being “mercenaries for the globalists” and said tech platforms are working to silence conservatives and independent media organizations.