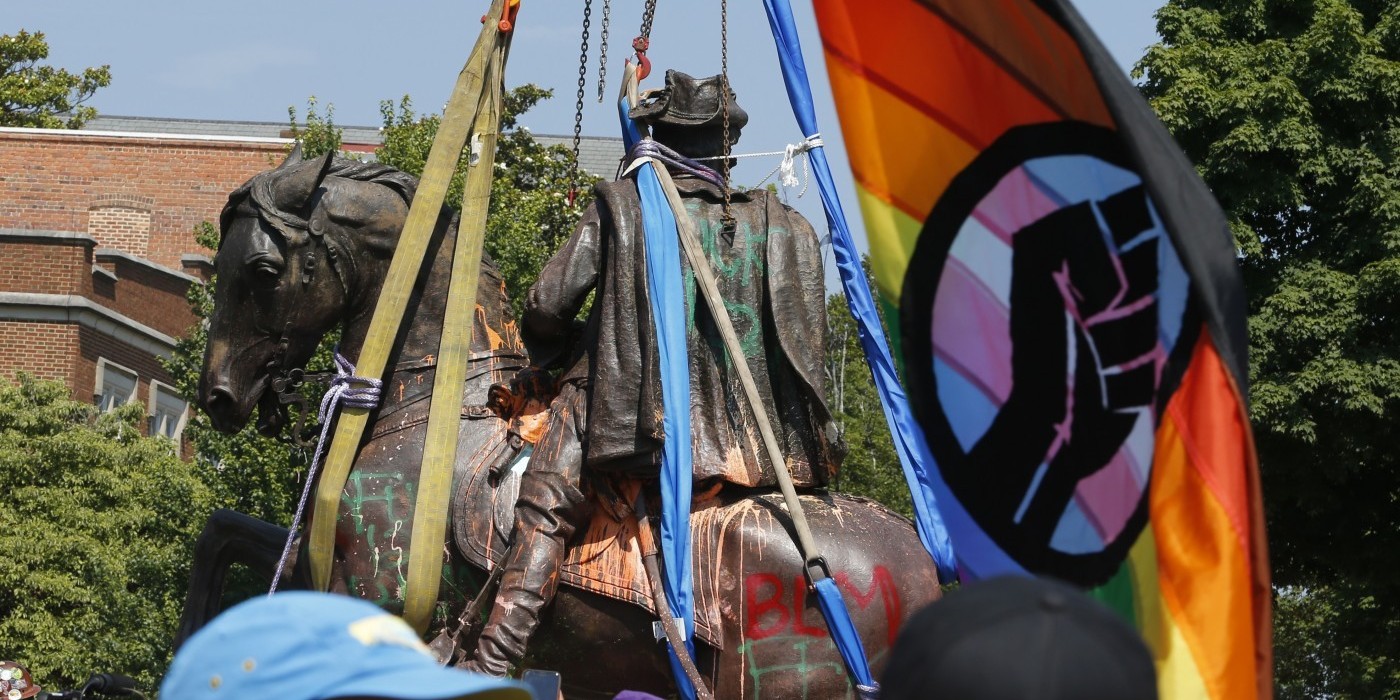 A protester holds a flag as crews lower the statue of Confederate General J.E.B. Stuart after removing it from its pedestal on Monument Avenue in Richmond, Va. / PHOTO: Associated Press

(Associated Press) Work crews on Tuesday took down a monument to Confederate Gen. J.E.B. Stuart, the third major statue to be cleared away in less than a week as the Confederacy’s former capital rushes to remove symbols of oppression in response to protests against police brutality and racism.

As a crowd cheered, crews strapped the huge bronze equestrian statue in harnesses and used a crane to lift it from its granite base to be trucked away. Some in the crowd chanted “Black Lives Matter” after the statue was removed. One person sang, “Na na na na, na na na na, hey hey, goodbye.”

It depicts James Ewell Brown (JEB) Stuart, commander of the Cavalry Corps of Robert E. Lee’s Army of Northern Virginia, in full uniform with a sword at his side, turned east as his horse faces north. The statue is 15 feet high, atop a 7-foot pedestal.

Inscriptions on the base are filled with tributes to Stuart, who was fatally wounded by a Union soldier and died at age 31 on May 12, 1864.

“He gave his life for his country and saved his city from capture,” reads one inscription, referring to the Confederacy.

The Stuart statue was installed on Richmond’s Monument Avenue in 1907, a time of reconciliation between the opposing sides, when white leaders across the South sought tosentimentalize the ‘lost cause’ of the Civil War.

Following the period of Radical Reconstruction, which had empowered Southern blacks, newly freed from slavery, with mixed results, the early 20th century also saw a resurgence nationwide of negative racial attitudes toward blacks, driven by cinematic depictions like the controversial film Birth of a Nation, which glorified the rise of the Ku Klux Klan.

The Stuart monument is one of several targeted by protesters in Richmond since the police killing of George Floyd in Minneapolis prompted nationwide demonstrations. Police declared an unlawful assembly on June 21 after protesters tried to pull it down with ropes.

Stoney has said the statues will be placed in storage while the city seeks public input on what to do with them.

Stuart’s has been the last major statue left standing, other than a massive monument to Gen. Robert E. Lee that’s on state land.

The Lee monument also is slated for removal, but that has been blocked at least temporarily by an injunction issued in one of several lawsuits filed after Gov. Ralph Northam ordered its removal last month.