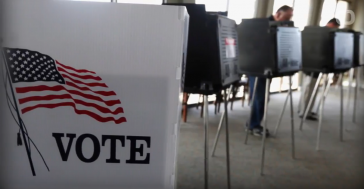 (Skyler Swisher, Sun Sentinel) They haven’t even made it to high school yet, but they managed to hack into a mock version of Florida’s election website and change the results in a matter of minutes.

An 11-year-old boy pulled off the feat in less than 10 minutes during DEFCON 26, the world’s largest hacking convention, according to a report by “PBS News Hour.” Buzzfeed reported another child — an 11-year-old girl — manipulated the site to make it appear that libertarian candidate Darrell Castle had won Florida’s presidential vote in 2016.

State election officials, though, say the mock site the children manipulated did not duplicate all of the safety features in place to stop hacking.

“It is not a real-life scenario, and it offers a wholly inaccurate representation of the security of Florida’s elections websites, online databases and voting systems,” said Sarah Revell, a spokeswoman for the Florida Department of State, the agency that oversees Florida’s elections.

In total, 35 of 39 participants ages 6-17 successfully hacked mock versions of Secretary of State websites in six swing states during a portion of the convention called the Voting Machine Hacking Village, according to event organizers. The “hackers” managed to tamper with vote tallies, party names and candidate names, changing vote tallies to numbers like 12 billion and candidate names to “Bob Da Builder” and “Richard Nixon’s head.”

In a statement, the National Association of Secretaries of State also expressed skepticism.

“Our main concern with the approach taken by DEFCON is that it utilizes a pseudo environment which in no way replicates state election systems, networks or physical security,” the statement read.

The group also noted that election-night reporting websites are only used to publish preliminary, unofficial results for the public and the media.

“The sites are not connected to vote counting equipment and could never change actual election results,” the statement read.

“To the best of our knowledge and the knowledge of our federal partners, Florida’s voting systems and elections databases remain secure and there has been no intrusion,” Florida Secretary of State Ken Detzner wrote in a letter Friday.